This is a repost of an article I wrote for the original iteration of my blog:

As has become a tradition for May 4th around the internet, I’d like to take a moment to share some personal thoughts and memories about the Star Wars franchise. I had planned to keep it short, but as with most things Star Wars I got a little carried away. Bear with me 🙂

In the summer of 1983, my dad took me to see a movie. While my mom insists (and I do believe you, Mom!) that my first film experience was SNOW WHITE, this is the first memory I have of going to the theater. It was to see a film called RETURN OF THE JEDI. I was only 4 at the time, and this is all that I remember from that experience:

That’s it really. But apparently I couldn’t stop talking about it afterwards. Eventually I would see all three films, of course. I don’t exactly remember when I saw them, but I know I saw THE EMPIRE STRIKES BACK last — I had already consumed the storybook and audiotape version before.

I was the perfect age for all the Kenner toys that came out. You know, the ones with the cheap vinyl capes that tore within hours of playing with them and the lightsabers that were sheathed inside the arms. You lost all of the guns and other small bits immediately, but it didn’t matter. Also, Han’s hair kept rubbing off, and my mom would have to fill it in with black permanent marker.

I even collected UPC codes and sent away for the Emperor and then later for Anakin Skywalker. I still have both on my shelf. If only I hadn’t played with any of those toys, I wouldn’t need to save for retirement…

I remember when my dad got our first VCR. It was about 6 inches high, wider than the television we had at the time, and probably weighed about the same as me. The first tape that ever went into that machine was a rental copy of STAR WARS. 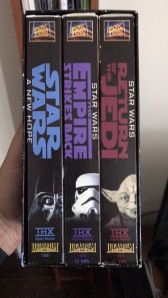 Eventually I had VHS copies of all three films, but they were vastly different. My copy of STAR WARS was recorded off of television, complete with commercials. I watched it enough that I had memorized which commercial came right before the movie came back on. THE EMPIRE STRIKES BACK was recorded off of Showtime. No commercials, but there was a really weird intro to the film that included a creepy-looking guy and someone running away from something. Don’t know why I remember that. RETURN OF THE JEDI was a proper store-bought VHS tape. Probably the first one I ever owned.

Eventually I bought all three in the “One Last Time…” release. Before those, the opening logos and crawls for Empire and Jedi were compressed to fit the 4:3 ratio. This release restored them to the proper format and also fixed some of the pan and scan issues. I remember noticing for the first time that Tattooine had a moon in the iconic opening shot.

The sound of the saga

The Star Wars franchise also was a big part of what got me into film music. One of the first score albums I remember owning was a Sony Classical cassette tape of John Williams conducting the “Skywalker Symphony” performing a number of classic cues from the trilogy. At the time, I didn’t really know the difference between a concert arrangement and the actual cues used in the film. To be honest, I didn’t care, and I played the tape endlessly.

I also got my hands on the recording done by the Utah Symphony, which was mostly famous for including a couple of never-before-available cues like the space battle in RETURN OF THE JEDI and “Darth Vader’s Death.” I know that this recording is held in high regard by many, but to be honest I found it disappointing. Some of the instrumentation just feels a bit off, and a couple of the cues (particularly the space battle) are taken at such a slow tempo they’re unlistenable (to me anyway).

Of course, I’ve since bought all three of the expanded scores (the ones in black slipcases) and all of the scores from the other episodes by this point. Unlike some of the films, all of the scores are superb in their own way, and they are always in my rotation of music.

Of dead trees (no, not the ones on Endor) and CDs

These days, it’s hard to remember when all we had were the original three films. Growing up, I was a huge Star Wars fan, but there simply wasn’t that much material out there. At one point, I bought this giant (to a fourth grader) paperback book of the novelizations of all three films. I even was able to read it and have it count for many stars on my Book It! pin (remember those?), which of course I cashed in for Pizza Hut pizza. Rewarding reading with saturated fat…who says the 80s weren’t great?

Then in 1991, along came Timothy Zahn and his trilogy of books: “Heir to the Empire,” “Dark Force Rising,” and “The Last Command.” In my mind, these were Episodes VII-IX well before J.J. Abrams came along. If you are at all a Star Wars fan and you haven’t read these, do so. Now. Not only does Zahn capture the flavor of the Star Wars universe perfectly, he introduces many new memorable characters, including Grand Admiral Thrawn, who thankfully now lives on in cartoon form.

Around this point I also managed to catch a rerunning of the Star Wars Radio Drama on NPR. This is another really interesting artifact of the 80s, and it is actually quite well done. As long as you can get over the fact that most of the voice actors are NOT the originals (honestly, I never did get used to Brock Peters as Darth Vader), it’s well worth a listen. If anything else, there’s the novelty in the sequels of hearing John Lithgow (!) as Yoda and Ed Asner (!!!) as Jabba the Hutt.

I can’t remember what movie it was with, but I do remember being blown away by the trailer for the Special Edition theatrical releases. The small TV set in the middle of the screen that is blown apart by Wedge’s X-wing in the iconic shot where he saves Luke during the Death Star battle. Wow! A chance to see all three Star Wars films! THIS was going to be great!

And then a few of my high school friends and I went to the theater, and while it WAS exciting to see the movies up there on the big screen and to see things like that added scene with Biggs, there was just something wrong about it too. For those who have only seen the SE on DVD/Blu-Ray, Jabba looked 20x worse in the theatrical version (and he STILL looks bad). Not to mention the multiple tweaks that gave rise to the “Han Shot First” meme. And they took out “Yub Nub” at the end of Jedi!

This is why I still have my VHS box set. And Lucas wasn’t done there, tweaking the movies endlessly ever since. His last change, the dubbing in of Vader’s awful “No….NOOO!!!” at the end of Jedi is the sole reason I refuse to purchase the Blu-Rays.

I’ve got a bad feeling about this…

My college roommate and I went the first midnight showing of STAR WARS – EPISODE I: THE PHANTOM MENACE in Pittsburgh, Pa. The theater was PACKED with people, many of whom were dressed up as their favorite characters. When the STAR WARS logo came up, the room was filled with the kind of cheering that is usually reserved for sporting events.

And then we watched the movie.

But Lucas pulled off a magic trick. He ended his supremely disappointing movie with a lightsaber duel so exciting and memorable that my friend and I were actually jazzed up about the next film!

And when the first trailers for EPISODE II: ATTACK OF THE CLONES appeared, Lucas managed to pull another fast one on me. THIS looks more like Star Wars I told myself. This time, there’s no little kid to drag things down. This will be much better.

I will spare you my arguments about why I think that it’s the worst film in the franchise, but it did provide me with, what is to this day, my favorite in-theater viewing moment. Recall the awful scene on Naboo where Anakin and Padme are talking by the fire. At some point, Anakin remarks, “I’m in agony!” to which someone somewhere in the theater replied, “YOU’RE NOT THE ONLY ONE!!”

And then Lucas managed to do it AGAIN! The REVENGE OF THE SITH teaser comes out, and once again I get my hopes up. THIS looks awesome! Has Lucas finally remembered how to make an entertaining movie? Because this looks SO much better than that steaming pile of junk that was ATTACK OF THE CLONES.

And in fairness, it WAS better. I’d argue that Revenge’s failings are more to do with Lucas not knowing when enough was enough and also being saddled with poor decisions he had made earlier (like with casting and setting up his story). Revenge is really the only one of the three prequels that I can sit down and enjoy, but I do find myself skipping ahead at points.

When it was announced that J.J. Abrams was directing Episode VII, I had mixed feelings. I had loved what he did with his STAR TREK (2009) reboot, but he had managed to lose a lot of goodwill with me with the follow up STAR TREK INTO DARKNESS (2013). Also, I was extremely wary, having been burned three times in a row by Lucas, that I would get my hopes up way too high.

That said, Abrams had shown himself to be a competent director, and Lawrence Kasdan was helping to write the script, which was a plus.

In a way, going to see THE FORCE AWAKENS (again, first showing with some friends) was sort of the inverse experience from THE PHANTOM MENACE. I had to allow myself to relax and admit that I was enjoying the film. It’s amazing the performances you can get from actors when you actually use real sets instead of green screen. I kept waiting for the other shoe to drop and, while there are story issues to be nitpicked, I enjoyed THE FORCE AWAKENS so much, probably because I purposefully avoided as much hype as possible.

Of course, the same can’t be said for THE LAST JEDI. I’ve already been reminded that, yes, it is possible to make a good Star Wars film, both with THE FORCE AWAKENS and last year’s ROGUE ONE (I’ve already written and talked about that film at length — suffice to say I definitely enjoyed it).

Along the way, the new films have managed to awaken the part of my brain that was there back when I was 4, going to see RETURN OF THE JEDI for the first time. Looking for a home on my shelf right now is a Lego K-2SO, and it was only through sheer force (pun intended) I didn’t buy more. But that may change down the road…I make no promises 🙂

Do you have any memories or emotional ties to Star Wars? If so, I’d love to hear about them in the comments. And once again, May the Fourth (and the Force) be with you!

Follow Listening to Film on WordPress.com
Join 2,386 other subscribers