This post is written as a part of the Second Annual Remembering James Horner Blogathon hosted by Becky at Film Music Central.

Cliff (donning the Rocketeer helmet and rocket for the first time): “How do I look?”

When you were a kid, was there anything quite as cool as a rocket pack? Sure, superheroes like Superman can fly, but he’s really an alien from another planet. But a rocket pack? That’s something anyone can strap on and fly off anywhere you wish.

Except that in 1938, the ability to fly takes on a whole other nefarious meaning, because both the U.S. and German armies are trying to develop a working model for military purposes. When the audience first sees the rocket pack, it’s being hauled by two goons across an airfield, with the FBI in hot pursuit, and in the process, they destroy a brand new plane being flown by Cliff Secord (Billy Campbell) and manage to stash the rocket in a hanger where it is found by Cliff and his friend/father-figure Peevy (Alan Arkin).

That’s the set-up for the 1991 Disney/Touchstone Pictures film THE ROCKETEER, which was Joe Johnston’s second directorial effort (following on 1989’s HONEY, I SHRUNK THE KIDS). Based on a comic book series, this was Disney’s second foray into comic-inspired films (the first being 1990’s DICK TRACY).

One thing that I completely missed as a kid but sticks out to me now is how, in becoming The Rocketeer, Cliff is really the accidental hero. When he and Peevy find the rocket, neither of them is thinking anything remotely heroic. Their plane crash in the opening sequence also took out a gas truck, and its owner Bigelow (played with wonderful sleeze by Jon Polito) wants them to pay him back for the loss. This makes Cliff’s motivation for keeping and using the rocket one of financial necessity, not a desire to do good or right wrongs.

Not to say that Cliff is a bad guy. He’s just a regular guy with real-world problems, and he sees the rocket as a means to an end. Billy Campbell sometimes gets a bad rap for his performance here, but I rather like him. He’s not especially heroic, but then he really shouldn’t be because he’s not a hero in the normal sense.

He’s also a bit of a dolt when it comes to how he treats his girlfriend, aspiring actress Jenny (Jennifer Connelly). If there’s one fault I can find with the film, it’s that there really isn’t much chemistry between the two actors (despite the fact that they were allegedly dating during filming). This is a relationship because the script says so rather than because the actors sell it, even though they both look the part.

Cliff also quickly finds himself the rival (in more ways than one) with leading man Neville Sinclair (Timothy Dalton). Sinclair is obviously a take on Errol Flynn, and Dalton is clearly enjoying himself in the role. First, he is revealed to be behind the gangsters who were trying to steal the rocket, as he admonishes the head of the gang, Eddie Valentine (played, in a real stretch of casting, by Paul Sorvino). Later, Sinclair starts to make a move on Jenny, at least in part because he knows she knows who has the rocket.

He’s also sent his henchman, Lothar (Tiny Ron) in search of the rocket. I suppose it’s their way of calling back to the fact that this is a comic book movie, but Lothar is a bit distracting because of his obvious prosthetic makeup that seems like a leftover from DICK TRACY. The character also disappears for stretches at a time, becoming more of a plot convenience than an actual important element.

Getting back to Cliff, it’s interesting in that when he finally uses the rocket, he does it because he has no other choice. In fact, pretty much every time he becomes The Rocketeer, it’s to clean up a mess he’s created: he first has to rescue an over-the-hill pilot who is only flying because he’s trying to help Cliff out; later, Cliff needs to save Jenny from Sinclair after he uses it to escape a couple of FBI agents who also are after the rocket.

It’s this last wrinkle that might be the film’s only (minor) misstep plot-wise. Adding in the FBI adds a fourth group that either has or wants the rocket, and it’s a bit much to keep straight (as a kid, I remember being confused by who was who). I can forgive the added complexity a bit by the fact that these agents are working for the inventor of the rocket, who is none other than Howard Hughes (the always good Terry O’Quinn). He wants the rocket back to keep it from falling into Nazi hands; Neville Sinclair turns out to be a Nazi agent hiding within Hollywood society.

The presence of the FBI also provides one of my favorite little touches in the film. Towards the end, the FBI and the Valentine gang find themselves on the same side, shooting against the Nazis. At one point, Valentine and one of the agents stop firing their machine guns for a moment, look at each other, have this moment of ironic realization, and resume firing.

Despite a few creaky effects that definitely show their age, the film’s climax aboard a Nazi zeppelin works pretty well, and the final resolution that does Sinclair in calls back nicely to an earlier sequence where the rocket is damaged. I also really enjoy how Sinclair’s fiery plunge takes out the “land” in the “Hollywoodland” sign.

When I first saw THE ROCKETEER I really only knew James Horner based on his scores for STAR TREK II and STAR TREK III. Also being a big fan of John Williams’ score for SUPERMAN (1978), I was a little apprehensive about a composer who I felt was more subdued in his approach (silly me).

Indeed, his opening cue is not bombastic in the classic superhero vein. Instead, Horner wrote an absolutely gorgeous, long-lined melody from which to base the score. His main Rocketeer theme is one of my favorites from Horner’s entire body of work, and it is absolutely gorgeous in its first appearance, performed initially by solo piano over the opening credits. He also wrote a “B Theme” for The Rocketeer, which kicks in just as Cliff’s ill-fated flight takes off:

In a style similar to Williams, Horner also wrote themes for Jenny and for Sinclair. His  “Jenny” theme, which follows her character throughout the film, receives a lovely concert arrangement on the soundtrack that is introduced by piano, strings, harp, and solo French horn:

Sinclair’s themes consist of two motifs. The first is a descending motif similar to the one that Horner used in STAR TREK III to represent the Excelsior. The second, more sinister is four rising notes that are usually played in the low brass. Both make several appearances in the track “Neville Sinclair’s House” which plays over Jenny being brought to Sinclair’s home, his (unsuccessful) attempt to seduce her, and her discovery that he is a Nazi agent. 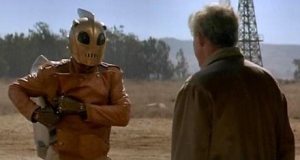 Because this is a superhero film, the action music is arguably the most important part of the score. Despite my unfounded initial reservations about the main theme, Horner does a magnificent job in tweaking his themes for the action cues. My favorite bits come from Cliff’s first appearance as the Rocketeer, as he rescues a pilot in mid-air. A bombastic version of the main theme accompanies Cliff’s attempts to successfully pilot the rocket, including two falls that are wonderfully scored by Horner:

He also brings back the second “flying” motif at the end of this sequence, scoring a humerous bit of action as Cliff flies out of control. This also includes one of the moments I definitely remember from the trailers: Cliff plows through a field as two guys who look like they should be selling Bartles and James wine coolers remark, “biiiig gopher.” It’s also perhaps the best use of the Jew’s harp I’ve ever heard in an action cue (an admittedly short list).

One of the unfair criticisms of James Horner is that he tends to recycle themes from previous scores. While he does do this, I don’t think its to any greater degree than most composers. If anything, he tends to reuse rhythms or short phrases rather than whole themes. For THE ROCKETEER, he does keep this to a minimum, save for the Sinclair theme I mentioned earlier, and his chromatic motif from “Genesis Countdown” in STAR TREK II. This latter motif appears most prominently in the build to the climax, which occurs in Griffith Park Observatory. As the tension builds between Cliff and Sinclair over an exchange of the rocket for Jenny, this motif plays prominently in the underscore. As Cliff manages to turn the Valentine gang against Sinclair (because of his Nazi roots), Sinclair then unleashes a hidden squat of Nazi foot soldiers, followed by the reveal of a giant zeppelin hiding behind the observatory (not sure how this is physically possible but  go with it). The remainder of the cue is rounded out by the expected action music featuring the main themes as well as Sinclair and Jenny’s themes.

The final selection is from the final climax of the film, which takes place aboard the zeppelin. Once Sinclair is killed, Cliff (now rocket-less) and Jenny run across the top of the zeppelin which is being engulfed in flames. Finally, Hughes and Peevy arrive in the nick of time to rescue them, as a final statement of Sinclair’s theme plays over the Nazi emblem disappearing in the fire.

Excerpt from “The Zepplin”

All in all, THE ROCKETEER is an immensely enjoyable film that unfortunately didn’t do well at the box office. Joe Johnston does a terrific job nailing a period feel (a talent he would also bring to CAPTAIN AMERICA: THE FIRST AVENGER later in his career), and all of the actors perform their roles well. It’s a shame that the film didn’t do as well as it could have on it’s initial release, but it seems to have found an audience thanks to home video. Despite the rash of comic book movies these days, few seem to have the heart and characters of a film like THE ROCKETEER. If you haven’t seen it yet, I highly recommend you check it out.