This post is written for the Second Annual Remembering James Horner Blogathon hosted by Becky at Film Music Central. It also continues my look back at the music of the Star Trek films in general.

The success of STAR TREK II: THE WRATH OF KHAN virtually guaranteed that there would be a third Star Trek film. Nicholas Meyer, who had so skillfully written and directed the second film, refused to do the third based on his displeasure with the idea of bringing back Spock. Ironically, this would wind up putting Spock himself, Leonard Nimoy, in the director’s chair for the second Star Trek sequel, which was written and produced by Harve Bennett.

One area of continuity between this and the previous film was the retention of James Horner as the composer. In this second film, he would be given the chance to add new themes, primarily for the Klingons and the Genesis Planet, and also further develop multiple themes from the previous film.

In looking back at the scores of the various Star Trek films, STAR TREK III: THE SEARCH FOR SPOCK seems to have fallen in the proverbial crack between the excellent STAR TREK II: THE WRATH OF KHAN and the immensely entertaining STAR TREK IV: THE VOYAGE HOME (although the score to the latter film is certainly polarizing). On a more personal level, this particular soundtrack holds a special place for me:

STAR TREK III introduced me to the world of film music.

I had been aware of movie theme songs for a long time (my childhood was marinated in all things STAR WARS), but in terms of underscore, this was the film that made me sit up and notice.

The moment comes about halfway through the movie. The Klingons have landed on the Genesis planet and are tracking an away team of Saavik, David Marcus, and a rejuvenated Spock. Suddenly, and without warning, the sun begins to set on the rapidly aging planet. As both Kruge and David watch, there is this emotional swelling of fluttering strings playing over the scene. It only lasts for about 30 seconds, but I had never consciously noticed a moment so brought to life by the underscore quite like that. Ever since then, I was hooked.

(What’s amazing is that this cue was not included in the original release of the score).

While this is a very personal connection, I think that overall THE SEARCH FOR SPOCK gets overlooked by those who simply think of it as James Horner doing a rehash of his score to the previous movie. While many of the themes are no doubt similar, I think this is a very superficial and unfair critique. Its popularity was certainly not helped by the rather abysmal first CD release, which is missing a lot of quality music yet found room for an embarrassing disco version of the theme song. Ugh.

The score, like the film itself, is much more emotional and personal than it’s predecessor, and the orchestration suits that very well. In many ways, it’s a more mature score than THE WRATH OF KHAN, and is one that is more suited to sitting down and listening to rather than something to have on in the background. There is a subtlety here that isn’t really present in much of KHAN, especially in the lower registers, and if you’re not paying attention you might miss it.

Of course, the Kirk and Enterprise themes are both there from the previous film, and while I absolutely love the Jerry Goldsmith theme, these two from Horner might be my favorite character themes from the films (I’ve always thought of the Goldsmith theme representing Star Trek itself rather than any particular character). Horner also makes the best use of the original Alexander Courage fanfare of any of the composers, particularly in a moment that I will get to later, typically rotating the theme across multiple sections (primarily the horns and trumpets).

This sequence is easily the best in the film and the score, and with the possible exception of “The Enterprise” from STAR TREK: THE MOTION PICTURE, this may be my favorite cue in the entire series. If you want just the highlights of what James Horner Star Trek music is, this is it distilled into a fantastic eight minutes and forty-two seconds. The entire cue is a wonderful romp that perfectly fits the action on screen, as Admiral Kirk and his party, well, steal the Enterprise.

There’s an interesting theme (3:11) that Horner brings in with the horns right when the team beams over to the Enterprise. I could be wrong, but I don’t remember hearing it anytime before or after this scene. In addition, nowhere in the series is the Alexander Courage fanfare better used than in the moment right as the Enterprise is set to pull away from space dock. The music builds as Courage’s theme moves through the orchestra until the order for “one-quarter impulse power” is given, and the ship slowly starts to move.

The U.S.S. Excelsior, and particularly Captain Stiles, receives a piano/mallet percussion-based melody (right about the 39s mark) that I can only really refer to as the “pompous-ass” motif. 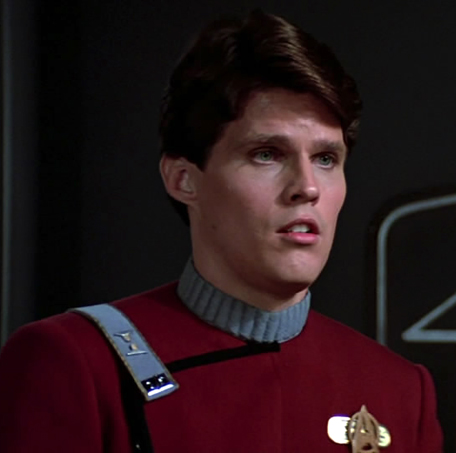 “This isn’t reality. This is fantasy.” -Uhura

It makes an appearance pretty much any time the Excelsior crew is on screen, such as the moment when Stiles is interrupted while filing his nails (!!). I also refer to it as the “pompous-ass” motif because it underscores the scene with Mr. Adventure, right before Uhura locks him in the closet. It’s also worth noting that James Horner would later seemingly adapt this into a secondary theme for Timothy Dalton’s character, Neville Sinclair, in THE ROCKETEER.

The bit of the cue (starting around the 6:13 mark) is a perfect example of building and releasing tension. The Enterprise is heading towards the giant space doors, but it’s unclear whether they are going to open. Then, at the last minute, Scotty works another miracle, and the Kirk theme is reprised in triumph as the Enterprise exits and turns towards space. For a moment, a lyrical rendition of the Enterprise theme plays once, but is interrupted by the approaching Excelsior. After some back-and-forth between Stiles and Kirk, the Enterprise warps away. As the shiny-new Excelsior begins to power up its fabled transwarp drive, Horner supplies some gloriously over-the-top “revving-up” music until, just like in the movie…nothing happens.

This is another back-and-forth cue that plays the Kirk theme off of Horner’s Klingon theme. The latter theme is another polarizing bit among Trek music fans. I happen to think it’s fine; Goldsmith’s is so good it’s not really fair to compare them. My favorite moment is when it looks like Kirk has won the battle, and there is a tremendous trumpet counterpoint playing over Kirk’s theme. Then, the crew slowly realizes that they’ve overtaxed the jury-rigged Enterprise, and the tone takes a turn for the worse.

I also have to mention the next scene, where Kruge orders the death of one of the landing party (which ends up being David), and we see Kirk’s reaction to the news that the son that he just was reunited with is dead. In addition to being some of Shatner’s best acting in the series, it’s particularly striking that the entire sequence is (appropriately) unscored.

“A Fighting Chance to Live”

Another glaring omission from the original CD, “A Fighting Chance to Live” chronicles the final moments of the U.S.S. Enterprise. Slightly dissonant strings play over a mournful version of the Enterprise theme as Kirk, Scotty, and Chekov set the auto-destruct sequence and beam away just as the Klingon boarding party arrives. Interestingly, there is a percussion underscore for the actual destruction of the ship, which I never realized was there until I heard it on CD (and is perhaps the first and only appearance of the “thunder sheet” in Star Trek music).

This track contains another favorite moment of mine, where Kirk , climbs to the top of cliff, having just defeated Kruge, and looks out over the doomed landscape of Genesis. While I go back and forth on the merits of the actual Genesis “theme” (it’s really a take on Holst’s Uranus: The Magician), it works well here. This is particularly true when contrasted with the Spock theme and then the classic early Horner trumpet flourishes as the bird of prey warps away from the exploding planet. 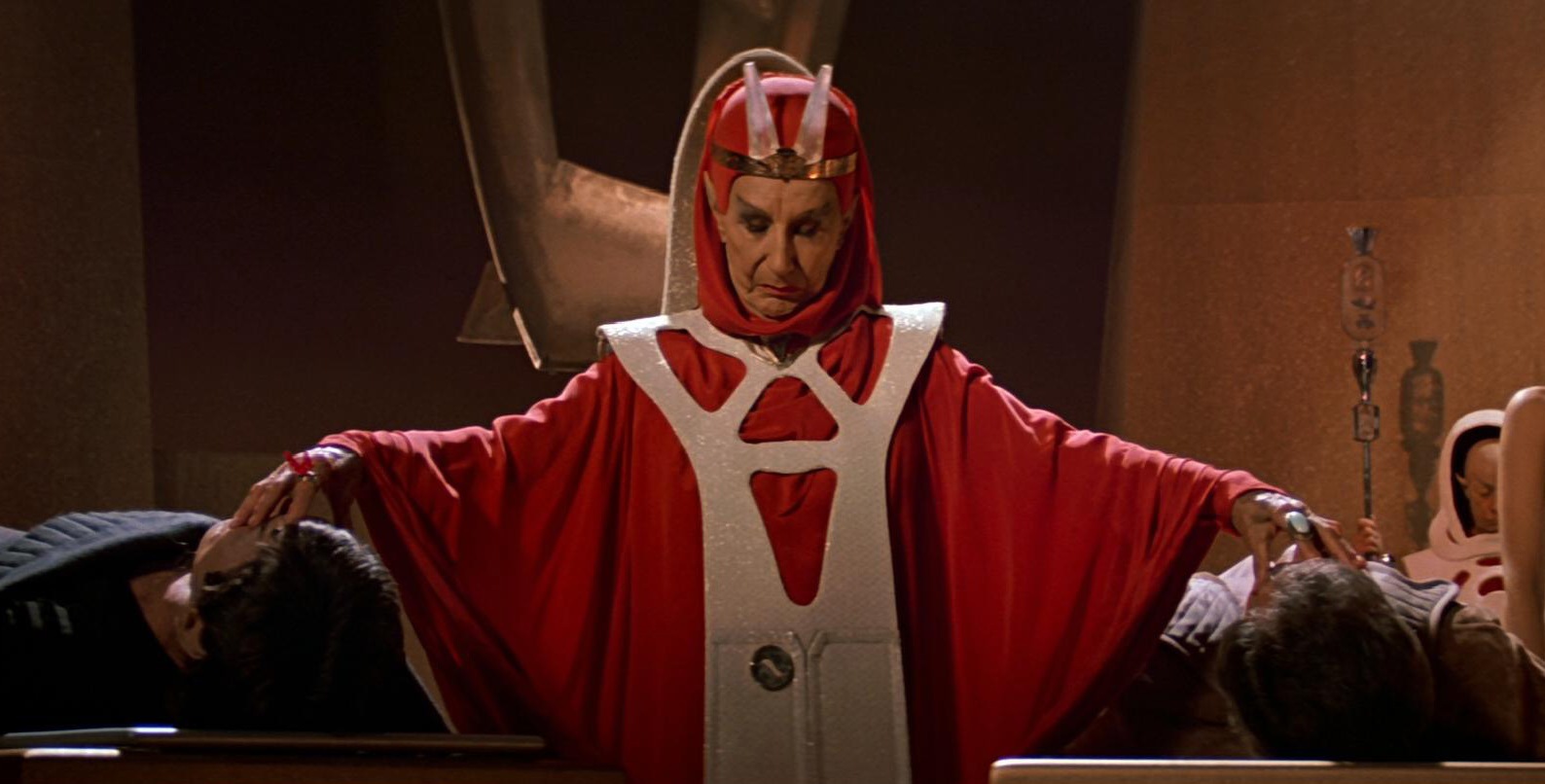 Finally, ”The Katra Ritual” is another evocative piece of music, starting quietly with rumbling percussion that slowly builds, adding strings, gong, and orchestra as the Fal-Tor-Pan is performed. This sequence, along with the sunset moment I mentioned at the beginning, were really what got me into film music to begin with; a journey that started more than 30 years ago.

…and the Adventure continues…

Follow Listening to Film on WordPress.com
Join 2,387 other followers